In the mid 2000s, Jonathan Wheby bought nearly 50 acres in the desert near Dinosaur, Colorado. He had a huge vision of a small cabin to be used by his friends as a retreat from the everyday. He envisioned a place where friends could camp, cook and explore their artistic sides, totally off the grid, while mountain biking, climbing and hiking the hours away. He built a 12" x 20" A frame that was shared and loved by many of the people he considered to be his extended family for a few short years. Early in 2010, he learned that he had built the cabin on the neighboring property - about a hundred feet from his own land. Heartbroken and embarrassed,  he attempted to rectify this problem with the property owner with no positive outcome.

In March, 2011, Jonathan drove out to his cabin, left his belongings to his friends, signed the desert property over to me in a quit claim deed, and walked off into the desert, never to be seen again. His close friends and estranged family all have their own ideas of where Wheby is right now, and no one can be certain. I like to believe that he left this property to me because he believed that I would do everything in my power to fulfill his original dream of creating a community asset where friends, artists, explorers and hunters could come and escape the norm.

I hope to fulfill Wheby's Dream, and take it a step further by enlisting the aid of his chosen family of friends, healers, artists, builders and community to create a world class, off the grid, Eco-retreat available to anyone who has attempted, survived, been affected by suicide, or otherwise wishes to help further suicide awareness and prevention in Northwest Colorado - or all of the nation, for that matter. 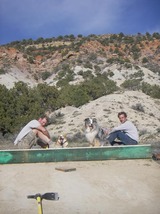 Jonathan and Billy with dogs Jackie and Medea
The plan is to raise funds, build an awesome, off the grid, three bedroom house complete with art studio and access to all the Dinosaur area has to offer. Then, place the land and structure in a trust to benefit suicide prevention. Simple... or so it seems. However, raising capitol is never as easy as it seems.